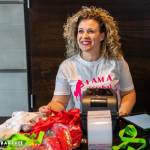 Today’s success was in London and on 18th of October we are traveling 🧳 to Stockholm!

What are you waiting for? Book your places today!

‘I want to ensure that everyone feels welcomed, loved, safe and supported. One of my passions has always been to connect people. I love to see people grow together and empower one another, that is truly what makes my heart sing.’ - Kicki Pallin

*Dayna Reggero* is an award-winning film director, conservationist, listener, and founding director of the Climate Listening Project. Dayna’s work started at 19, when she began appearing on television with animals to promote conservation.

Salon.com wrote: “By trade, Dayna Reggero is an environmentalist. Her work spans over two decades and ranges from filmmaking to beginning her career as a spokesperson. However, her most skilled work might come in the form of organizing conversations, or simply starting them.”

Dayna has been interviewed by CNN, ABC, CBS, NBC and FOX networks and coordinated with Animal Planet, TLC, and the Food Network for features. Her efforts have been featured on hundreds of outlets including NPR, Univision, The Atlantic, and Jane Goodall Institute. Her work was selected by National Geographic as an Open Explorer Expedition and featured in the nationwide PBS series EcoSense for Living.
🌈Hurry up! The places are limited! 👇
http://globalwomanevents.com/stockholm

How To Connect With Your Life Purpose

Private session Activate The SuperPower in You!